This page contains the current posts from our commissioners, as well as general community news and information.

Due to Governor Jay Inslee’s most recent extension of the his Shelter at Home Executive Order, which prevents public gatherings, the April 6, Port of Allyn Commissioner’s Regular Meeting will NOT be held at the Port offices as previously scheduled. It will be held on April 6, at 6 p.m. — online — via Zoom Conferencing. Members of the public are invited to join the meeting, and will be given an opportunity for public comment at the usual time on the meeting agenda. The meeting ID is: https://us04web.zoom.us/j/3730840011 … read more

A Message From The Port of Allyn re:COVID-19

During these uncertain times, the Port staff continues to focus on serving the public, as well as protect the health of the community and Port employees. As communities nationwide continue to feel the impact of the Coronavirus (COVID-19), we want to share with you the steps we’re taking to help protect the health of our community and our employees. We’re closely monitoring local and national reports on the evolving impact of COVID-19. Based on guidance from the Centers for Disease Control (CDC), the World Health Organization (WHO) and local public … read more

The Port of Allyn has established an online survey to gather public input for its upcoming Comprehensive Scheme of Harbor Improvements — which is its project roadmap for the 2020-2023 timeframe. The survey only contains five questions, and can be filled out and sent in with a few mouse clicks. It also contain space for comments from responders. The Port will be also be conducting two public hearings for the plan — February 3, and February 10. “We want to reach out to the public in every way we can … read more

The Port of Allyn will be holding two Public Hearings in February concerning the update to its Comprehensive Scheme of Harbor Improvements — the strategic plan governing the Port’s active and proposed projects between 2020 and 2023. The first hearing will take place on February 3, in conjunction with the regular Port Commission meeting. The second will be a Special Meeting, to be held on February 10. The public is welcomed — and strongly encouraged — to attend one or both meetings to give their input on the Port’s proposed … read more

The Port of Allyn has received a clean audit from the Washington State Auditor’s Office for the period covering January 1, 2016 through December 31, 2018. The audit covered the areas representing the highest risk of fraud, loss, abuse and non-compliance. Those areas are Cash Receipting — timeliness and completion of deposits; Accounts Payable; Credit Cards; Payroll; Contract Compliance; and Open Public Meetings — which included documentation of minutes, executive sessions, and Special Meetings. In the exit conference held on January 29, with both the Auditor who did the actual … read more 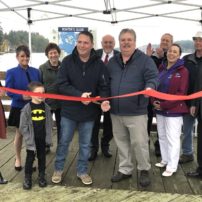 It was a great day for the Port of Allyn as it cut the ribbon on its new transient moorage facility. The ribbon cutting was a fun community event that was the culmination of almost two years of work to upgrade the existing dock to a full-service facility capable of handling boats up to 50 feet. In attendance were Representative Dan Griffey — who cut the ribbon — and was the project’s legislative point person, along with Representative Steve Tharinger, who heads the House Capital Budget Committee which funded the … read more 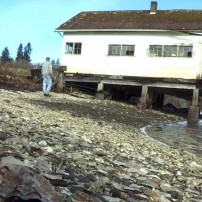 The Port of Allyn’s Sargent Oyster House historic restoration project has received a double dose of funding from the Washington State Legislature. The Port — which owns the historic building — had requested $712,000 for the full restoration of the building. But on the advice of Gordon Thomas Honeywell Government Affairs (GTHGA) — the lobbying firm the Port had hired to help secure funding — that ask was reduced to an amount that could fund what work could be actually accomplished between now and the next budget appropriation. The Legislature … read more